(An important note: standard deviations and effect size were purposely left out of the reporting of the statistics for ease of reading)

When the conversation began to build and people started to take sides, I decided that I wanted to investigate the 1992 Olympic Men’s Basketball team, affectionately known as the Dream Team, and see if I could come to some kind of statistical conclusion about whether or not the 2012 team stacked-up in a head-to-head contest.

The conclusions that I will draw will say nothing of what would happen, since we do not have a time machine (at least I do not) and as such we cannot see what would actually happen if the squad in 2012 met the 1992 version of the Hall of Fame members of the Dream Team.

Instead, my goal is to look at the statistics of the game, the numbers that are used to generate fantasy leagues and talk about the hierarchy of all-time greats with a standardized precision. I will utilize the statistics from Basketball-Reference.com, which is a database of extensive statistics that are wonderfully robust for the time periods I am investigating.

I will use statistical tests to compare the two teams as a whole, and as well a position-by-position analysis. For the sake of an objective analysis, I will not be taking into account the career statistics or career accolades of the much-lauded 1992 Olympic Team. Also, I will be omitting the statistics of rookie Anthony Davis from the 2012 team (because he does not have professional basketball numbers) in addition to Christian Laettner of the 1992 team, for the same reason. I will be using statistics from the year immediately preceding the Olympics games for all of the players included in the analysis, with the notable exception of Magic Johnson. I will use his career numbers, as 1991-1992 averages were not available. I had, briefly, considered using his 1990-1991 numbers, but they would be many months removed and felt that the career numbers were a more conservative estimate of his numbers (as his career numbers reflect comparatively) and a better representation of his contribution at the time.

What will follow will be a statistical analysis of the Olympic squads from the Dream Team forward. While statistics do not reveal everything, there is something to be said about an objective, comparative analysis in the only way that is possible: statistics. The intangibles of the game are what make watching it so great. This is an exercise in combining two great loves: statistics and basketball.

What Does It All Mean

For many of the readers, I imagine statistics are simply that awful word-based math you had to sit through during school. Perhaps mentioning statistics conjures the famous Mark Twain quote: “There are three kinds of lies: lies, damned lies, and statistics.” For the sake of this analysis (and subsequent analysis), I will be using group comparisons. I had contemplated the variety of ways with which I could talk about the data and the most pertinent was using each Olympic year as its own group and drawing conclusions from there.

What we are interested in when considering group comparisons is whether or not a group is distinguishable from another group in a statistically significant way. This is to say that if there were no labels that we would be able to say one group was larger or smaller than another group in a meaningful way and not just due to chance. So when I talk about the mean values (the averages) of any particular statistic, I will be sure to differentiate purely numerical differences and statistical differences. Since I know that statistical analysis is about as interesting as pulling teeth for most fans, I will try and rephrase everything in more palatable terms. Much of what we love about fantasy sports is due to statistics. I love using statistics to examine basketball because it allows me a unique perspective into the game that is often only afforded to basketball-operations types.

The first step when considering so many variables and groups is to perform a multivariate analysis of the data. There are multiple dependent variables and we want to guard against statistical errors, so performing due diligence toward that end did indeed yield a significant multivariate effect at the p < .001 level. This means something and nothing all at once.

What this means is very simple: there are differences between the Olympic teams and that difference is statistically significant. The reason why it doesn’t tell us much is that teams are different and how they are different is not revealed in a multivariate analysis; instead, we know to look further and we shall. In addition to a multivariate analysis, I was curious whether or not there were factors that hung together when considering teams that won a gold medal since the 1992 Dream Team.

A factor analysis, in the simplest terms possible, is an attempt to understand how variables hang together. So when I say that the top three factors account for 67.37 of the variance, I am certain that means very little. The number goes over 80 percent when including two more, much smaller, factors.

So the first factor is comprised of the following: RPG, BPG, ORPG, DRPG, HGT, WGT (38.940%). This looks a lot like a defensive statistic, which would work well to describe a power forward or center. The second factor is comprised of these variables: PER, OFFRAT, PPG (16.384%). I would venture to say this factor is very much a scoring statistic, which might fit very well with a shooting guard or small forward. The final factor was comprised of these: TSPER, FGPER, USAGEPER (12.046%). This looks suspiciously like a leadership statistic that would fit well with a point guard (or the newly minted point forward).

What the deuce does that mean? Nothing, really. For a statistician such as myself, I might be inclined to take my analysis further utilizing these new categories, but I won’t. For the casual basketball fan, it means that there are definitely three factors to a great team: defense, offense, and leadership.

Alright, enough with the explanations. Let’s get to the statistics.

How were they different?

The 1992, 2004, 2008, and 2012 teams all had significantly lower ages than the 2000 team. What about the question of whether or not the 2012 team was younger than the 1992 team. Numerically, this is true. However, there was no statistical difference in age between these two teams. This, in plain terms, means that we cannot be certain that the difference in the ages is not due to chance. 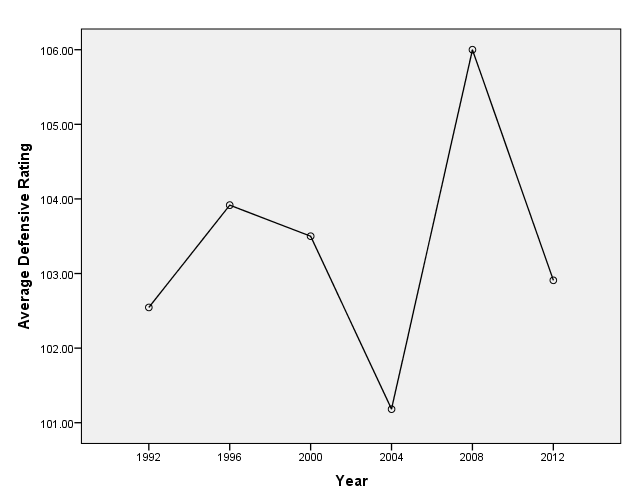 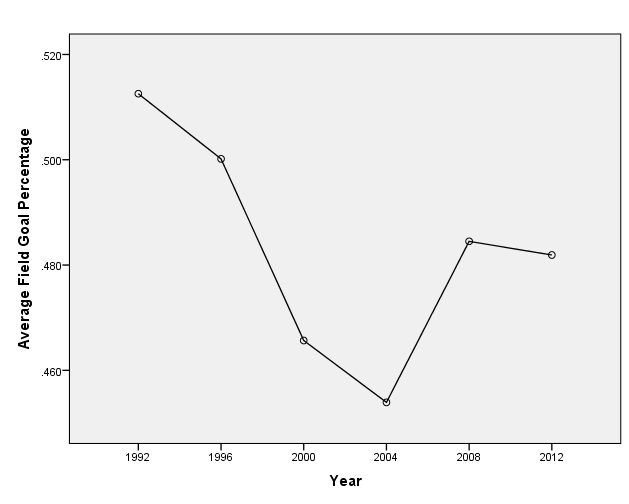 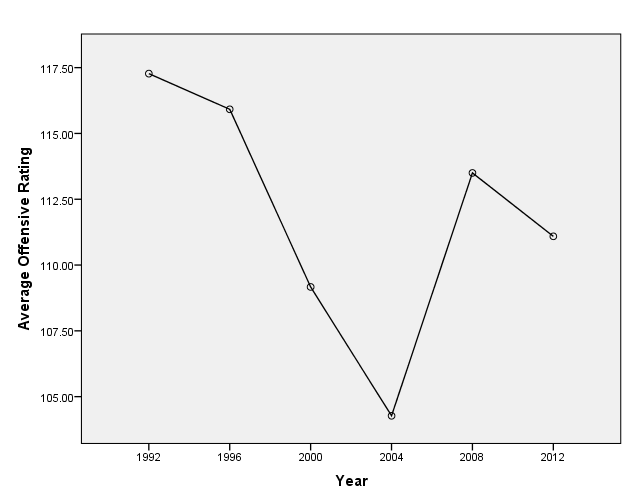 Making sweeping conclusions about statistical data is part of the fun for me. Basketball is a team sport where one individual can dramatically change the course of a game. An Olympic team is, in theory, comprised of the best players at a given time. The only team that was significantly different than any other year was the 2004 team, which was the only team since 1992 to not win a gold medal.

Does that mean we can say that the other teams are better?

All we can really say is that the other teams were more similar to one another (teams that won a gold medal) than they were different from the 2004 bronze-medal winning team. I imagine that is slightly anti-climatic. The reality is that looking at averages of all positions created a homogenized sample.

This site uses Akismet to reduce spam. Learn how your comment data is processed.